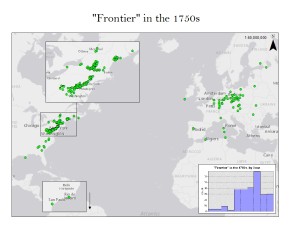 Custom maps are one of the features of Frontier Country.   In the book, Patrick Spero traces the development of frontiers in Pennsylvania by tracking when people use the term and where they describe as a frontier.  Spero’s database for the book relies primarily on the published versions of the Pennsylvania Archives.

As a supplement to his book and with generous funding from the Hellman Foundation and Williams College, Spero and a team of Williams students expanded this project by using data-mining techniques and interactive GIS-mapping.  For a year, students at Williams searched an online database of early American newspapers and then plotted the location of frontiers colonists read and wrote about.  Spero provides a argument for the power for using this method of research in the Coda to Frontier Country in order to help historians better understand the past.

Below are links to a series of animated and static maps that are best displayed on the web and show the results of this project.  The maps trace the evolution and locations of the early American frontier as those in the eighteenth understood it.  In addition, Spero has provided the raw datasets that went into making these maps in hopes that scholars and students can use this data to ask new and different questions about the early American frontier.

This animated video depicts the emergence and expansion of frontier regions in Pennsylvania throughout the 18th century and serves as a core piece of evidence for Frontier Country.

– Key Maps: The Transformation of Frontiers

This series of maps includes an animated video that traces the expansion of frontier areas from the 17th century to the mid-nineteenth century and several color static maps.  Also included are a series of graphs that depict the changing use of the word in newspapers after the American Revolution.

In hopes that other scholars may find the data used to create these maps useful for other purposes, a series of Excel spreadsheets containing the raw data that created these maps can be found on this page.