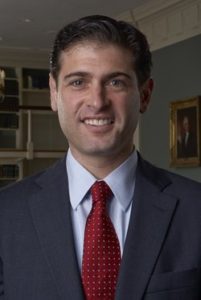 Patrick Spero is the Librarian and Director of the American Philosophical Society Library in Philadelphia. As a scholar of early American history, Dr. Spero specializes in the era of the American Revolution. He has published over a dozen essays and reviews on the topic. His is the author of Frontier Rebels: The Fight for Independence in the American West, 1765-1776 (Norton, 2018), of Frontier Country: The Politics of War in Early Pennsylvania and The American Revolution Reborn: New Perspectives for the Twenty-First Century, an edited anthology also from Penn Press. For more information on Dr. Spero’s work, please see his CV or visit his Amazon author’s page.

Prior to his appointment at the American Philosophical Society, Dr. Spero taught at Williams College where he served on the faculty of the History and Leadership Studies Department and received recognition for his integration of new technology in the classroom. Dr. Spero has also held the position of Historian at the David Library of the Revolution and served on their Board of Trustees. He currently serves on the board of the Abraham Lincoln Foundation and the Consortium for the History of Science, Technology, and Medicine, the Council of the McNeil Center for Early American Studies at the University of Pennsylvania, the Cabinet of George Washington’s Presidential Library at Mount Vernon, and on the Academic Advisory Board of Benjamin Franklin’s House in London.

He received his Ph.D. from the University of Pennsylvania in 2009 and has held long-term fellowships from the McNeil Center for Early American Studies, the Society of the Cincinnati, the Doris Quinn Foundation, the David Library of the American Revolution, and the American Philosophical Society.